Nitrogen is one of the most vital major nutrients that plants need.

Sure, you can get a bag of chemical fertilize and throw that around, but in many cases a natural source is more suited to your needs - especially when growing vegetables. 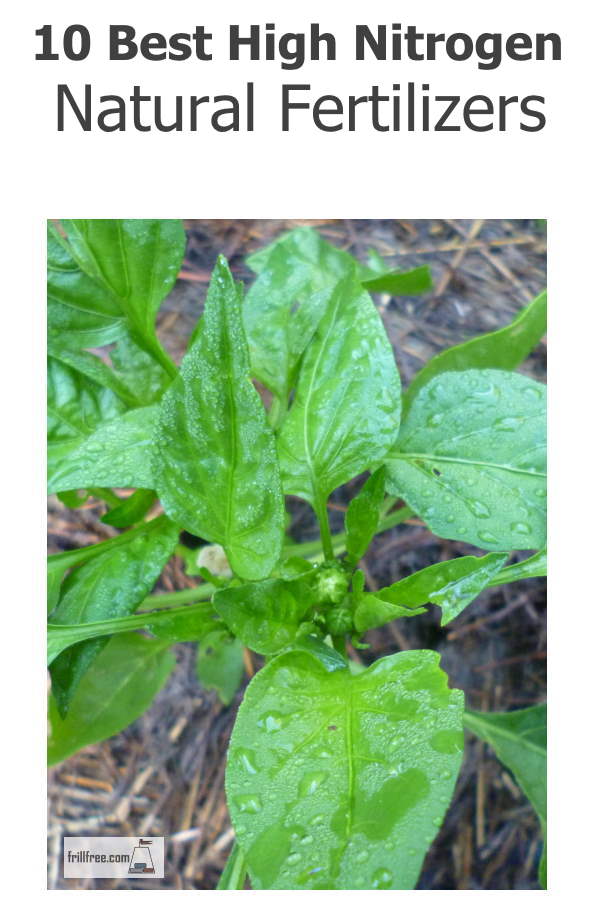 Organic sources are more variable, but also include other micronutrients that your plants require, and in some cases, organic matter which benefits the soil.

Choose from the nitrogen sources listed below for your favorite:

Great for using mixed with sawdust or other wood product, as the sawdust will tie up Nitrogen from the soil as the microorganisms get to work.

This Nitrogen is released later, as the sawdust decomposes, but in the meantime, without another source of N, your plants will suffer.

Advantages: you only need a bit as it’s so concentrated.

Cons: not sustainable if the bat caves of Peru and other South American countries are depleted and the bats continue to suffer from white nose syndrome, a fatal fungal infection. Some experts fear that the fungus is spread by humans entering caves that are used by bats.

Bat guano is also high in embodied energy – that intangible measurement of the distance that ships and trucks have to travel to deliver it from the source to you.  The other options are a much friendlier alternative, such as:

The springtime when you clean out the chicken coop can produce a lot of valuable chicken manure, which, like bat guano is a rich source of Nitrogen.

Used judiciously, composted well with the deep litter of the chicken house, this is one of the absolute best of all high nitrogen fertilizers.

Use dry as a top dressing, or mix into the soil well before planting to allow the micro herd to start work on processing it.

Battle fields are where you can see this particular fertilizer at work.

Abattoirs are the source of commercial blood meal.

Usually dried and purchased as a dark red powder, this product is generally spread around those crops that require a rich soil, or added to slow compost as an activator.

Cons: the smell of blood meal can attract wildlife (like bears) or the neighbor’s dog.

In the organic garden, each little pellet releases the nutrients slowly over a few weeks to months.

They act as a natural slow release fertilization program for plants that need an extra boost.

One day,  I noticed that my raspberry canes were looking a little weak. The leaves were yellowing and the fruit was small and sparse.

I made the decision to give them a little pick me up, and sprinkled a generous amount of goat manure, in its tidy little pellets, mixed with the sawdust that was the bedding for the goats.

A while later, the raspberry plants looked better, and I picked the fruit.  Which tasted awful!  The taste of goat in the fruit made them the worst I've ever tasted.

The absolute best type of fertilizer for raspberries is LOF, applied in the dormant stage, early in spring maybe, or after the fruit is harvested.

The fact that horses only have one stomach makes it impossible for them to completely digest the hay and green fodder, leaving a good percentage of smaller particles that can add valuable organic matter to the soil.

A disadvantage of this process is that they also don’t digest seeds of the weeds that they eat, and those germinate and grow wherever fresh horse manure is spread.

It’s absolutely imperative to compost horse manure properly (ie: by allowing the heat to build up and kill weed seeds) before use. The only time you don’t need to do this is when using fresh horse manure in compost tea.

How To Make Compost Tea

I make compost tea with anything available; alfalfa pellets or meal, dried weeds, horse manure, or even compost.

Add a couple of shovels full of compost to a nylon stocking, and immerse in a large trash can full of water, stir daily for a week or two and dilute before using.

Avoid using compost tea on leafy green crops that you will eat raw, as it can be a source of E. coli or other digestive problems.

Fish, planted whole in the same hole for a plant, have been used for millennia, so this is not new.

Use caution with fish fertilizer.  When they tell you to dilute it, don't think that if a little is good, more will be better.  This stuff is strong, and will burn plants.  It also smells terrible.  Don't use it on house plants, or anywhere near your house.  It can attract bears, if you live in bear country.

Guaranteed that the source will never run dry, and it can be used on most crops with the exception of leafy greens, for a similar reason to compost tea, and also for the ‘yuck’ factor.

What is it? Human urine is a high source of urea, which is broken down into nitrogen.

Harvesting commercially in large quantities is not a sustainable practice, but if you live near the ocean, take a couple of garbage bags with you when you go beach combing.

Rinse well to remove the salt before you put it on your garden.

Other sources of similarly valuable water weeds are Eurasian Milfoil, dredged from lake bottoms or Water Hyacinth, a rampant grower in warmer areas.

Don't worry; they're aquatic, meaning they grow in water, so they won't grow in your garden.

Cut it up into small pieces so it breaks down quickly, use as a mulch, or compost it.

Snow is known as the poor farmer’s fertilizer due to this.

This list gives you plenty of options for high nitrogen natural fertilizers to use on your organic garden. Choose one or two, and see the results.

Wondering how to use all these fertilizers?

Get the free guide for tips on applying many different types of natural fertilizers for the best results;

Fill in the form below; (add your name to the email list for access to more exclusive tips as they become available)